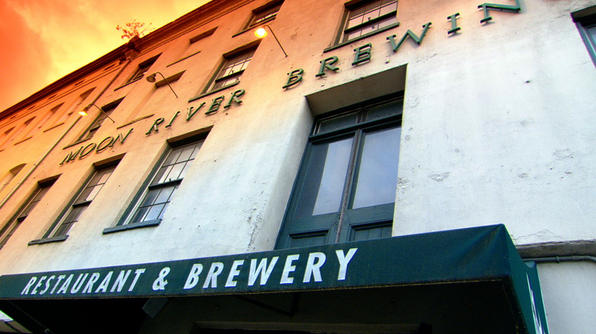 Located in one of Savannah’s oldest and most haunted buildings, the Moon River Brewery started pouring pints in 1999. Originally built in 1821 by Charleston native Elazer Early, the City Hotel was the town’s first hotel and post office. The City Hotel was an upscale establishment, however the affluent clientele occasionally resorted to violence defending their Southern honor. Drawing in customers from the Yankee North, locals weren’t always friendly to City Hotel customers. In 1864, after an increased wave of violence, the hotel closed when Gen. Tecumseh Sherman led the Union Army through Georgia.

By the time Gen. Sherman reached Savannah, the city was mostly deserted and buildings were spared typical Union destruction. The City Hotel survived the Civil War, and sat largely unused until the 1990s, when it was renovated into the Moon River Brewing Company.

During the spring of 1832, a feud broke out between an undesirable local, James Stark, and the city physician, Dr. Phillip Minis. Things escalated that August at the City Hotel. Stark was drinking heavily and spewing disparaging remarks against the doctor. Dr. Minus walked into the bar, saw Stark and shot him. Later, Dr. Minus said he saw Stark reach for his gun first, and when he went to trial for murder, the jury quickly acquitted him. They were happy to see Stark gone — and every town needs a good doctor.

Another instance of extreme violence took place in November 1860; Mr. James Sinclair almost met his death at the City Hotel. A resident of New York City, he headed to Savannah, GA, in the hopes of finding work. Locals did not react kindly to the presence of a Yankee in their hotel, and they pressured Sinclair to leave. When he refused, he was drawn out of the hotel by a lynch mob, stripped and beaten close to death.

Since opening, the staff and customers of Moon River Brewery have encountered many unexplained, and sometimes violent, occurrences. Accounts include bottles being thrown by unseen forces and people being touched, pushed, and slapped by invisible spirits. One prominent ghostly figure is “Toby,” who lurks in the bar’s billiard room where he has been known to push patrons and staff.

A glowing white apparition has reportedly been seen on the haunted restaurant’s upper floors and is believed to be the spirit of a hotel worker who died there in the late 1800s. In the 1990s during an attempt to renovate the building’s third floor, the foreman’s wife was violently pushed down the staircase. Locals say he gave his resignation on the spot and to this day, the upper floors remain in haunted and decay.

Stop by Moon River Brewery on your next trip to Savannah for some satisfying microbrews and Southern food. If you don’t have a Southern trek on your calendar yet, take a virtual tour of the haunted historic site led by co-owner, John Pinkerton.