Among the outpouring of eulogies, analysis and other post-mortem offerings about Steve Jobs, the one authored by his sister, novelist Mona Simpson, is the most poignantly rendered.

While the world continues to debate the genius of Jobs and how he applied that gift in delivering life-altering personal technology, Simpson’s remembrance of Jobs was succinct, smart and loving without being overwrought or overblown — especially insight about Jobs as house remodeler.

At Zillow, where houses and people’s relationships to houses is of paramount interest, Simpson struck an interesting real estate chord. While she only first met her older brother at age 25 since their mother had put Steve up for adoption at birth, Simpson grew very close to Jobs. Oddly, when it came toJobs’ well-known home on Waverley St. in Palo Alto, Simpson was able to offer an interesting revelation that belied the public image of the billionaire Apple founder.

Jobs did not make the kind of dictatorial design demands for his residential remodel as he did for the creation of his Macs, iPods, iPhones and his other sleek inventions.

“They once embarked on a kitchen remodel; it took years. They cooked on a hotplate in the garage. The Pixar building, under construction during the same period, finished in half the time. And that was it for the Palo Alto house. The bathrooms stayed old. But — and this was a crucial distinction — it had been a great house to start with; Steve saw to that,” said Simpson.

That is really a priceless headline: Steve Jobs Cooks on Hotplate!

The idea that the Jobs’ family endured the kinds of remodel mayhem that the average homeowner puts up with was a nice table-turning moment. Can’t billionaires pay their way out of contractor delays and hotplate cooking?

Turns out that personal nugget was only the start of a wave of Steve Jobs real estate news to emerge since Jobs died Oct. 5 after a long battle with of pancreatic cancer.

On Oct. 6, Reuters reported that in 2009, when Jobs took a second leave of absence from Apple to undergo a liver transplant, Jobs and his wife, Laurene, transferred three real estate properties into a living trust.

In addition to the Palo Alto home lined with — you got it — apple trees, Jobs transferred two other Woodside real estate market properties. While it is unclear what other stock holdings or assets were transferred to the living trust, estate planning experts call this kind of planning appropriate for someone who wanted to protect assets, tax liabilities as well as privacy. 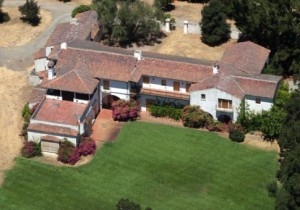 One of those transferred properties was likely to be the site of the former Jackling House – the massive, 1926 Spanish Colonial Jobs bought in 1984 and, after much fighting and controversy with a neighboring preservationist group, finally had it demolished in Feb. 2011.

The saga of the Jobs’ drive to demolish the historic mansion he dubbed “an abomination” was decades in the making. It skewered Jobs’ reputation as an architectural preservationist.

Now, according to Peter Bohlin, the founder owner of the renowned Bohlin Cywinski Jackson architectural firm, which has designed nearly all of Apple’s 350-plus stores and the Pixar headquarters, there are no plans to move forward. 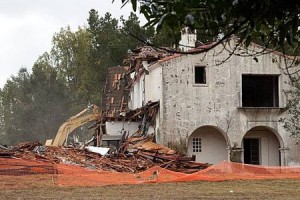 As for the roots of Jobs’ design sense? That also stems from the realm of real estate — the California ranch homes that sprung up in the 1960s of Jobs’ childhood.

According to the authorized biography of Steve Jobs by Walter Isaacson released just days after Jobs’ death, Jobs said his appreciation for Joseph Eichler homes instilled in him a “passion for making nicely designed products for the mass market.” Here’s an excerpt:

“I love it when you can bring really great design and simple capability to something that doesn’t cost much,” he said as he pointed out the clean elegance of the houses. “It was the original vision for Apple. That’s what we tried to do with the first Mac. That’s what we did with the iPod.”

The Jobses’ house and the others in their neighborhood were built by the real estate developer Joseph Eichler, whose company spawned more than eleven thousand homes in various California subdivisions between 1950 and 1974.

Inspired by Frank Lloyd Wright’s vision of simple modern homes for the American “everyman,” Eichler built inexpensive houses that featured floor-to-ceiling glass walls, open floor plans, exposed post-and-beam construction, concrete slab floors, and lots of sliding glass doors. ‘Eichler did a great thing,’Jobs said on one of our walks around the neighborhood. ‘His houses were smart and cheap and good. They brought clean design and simple taste to lower-income people. They had awesome little features, like radiant heating in the floors. You put carpet on them, and we had nice toasty floors when we were kids.’ 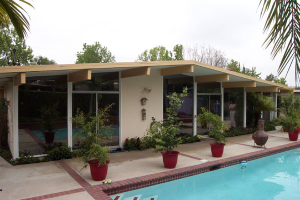 The Eichler ranch of his youth inspired his sense of design, but for the kids in Steve Jobs’ Palo Alto neighborhood, inspiration of a more sugary sort was the talk of the town. Despite his death, Jobs’ Waverly Street house was open for business on Halloween — complete with spooky decorations and a fog machine.

The man who brought a personal technology revolution by insisting that he knew what consumers wanted must have what kids still want: Candy. In fact, some of the trick or treaters who descended on Jobs’ home came dressed in costumes that would have pleased the Apple baron.

Odd, really, that as the world attempts to sort out Jobs’ legacy, the kids at his haunted Halloween house might have brought it all back home with low-tech homage to the high-tech priest of Palo Alto. RIP Steve Jobs 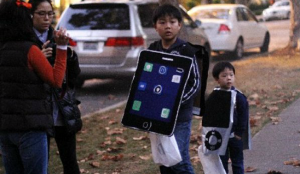